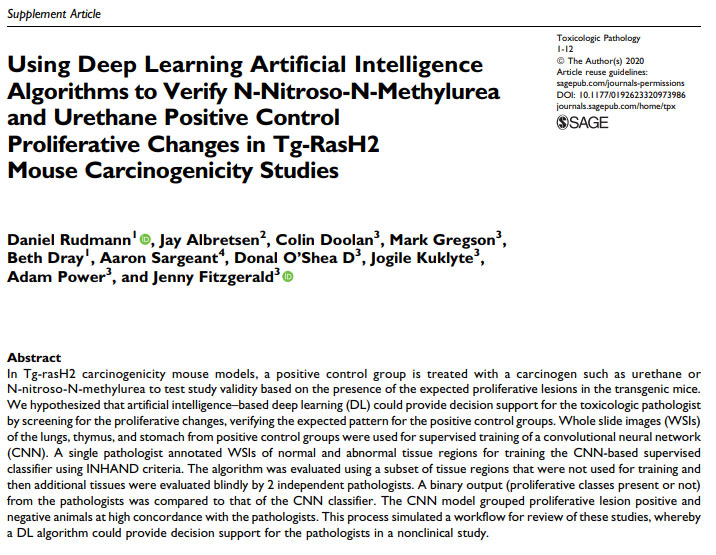 In Tg-rasH2 carcinogenicity mouse models, a positive control group is treated with a carcinogen such as urethane or N-nitroso-N-methylurea to test study validity based on the presence of the expected proliferative lesions in the transgenic mice.

We hypothesized that artificial intelligence–based deep learning (DL) could provide decision support for the toxicologic pathologist by screening for the proliferative changes, verifying the expected pattern for the positive control groups. Whole slide images (WSIs) of the lungs, thymus, and stomach from positive control groups were used for supervised training of a convolutional neural network (CNN).

A single pathologist annotated WSIs of normal and abnormal tissue regions for training the CNN-based supervised classifier using INHAND criteria. The algorithm was evaluated using a subset of tissue regions that were not used for training and then additional tissues were evaluated blindly by 2 independent pathologists. A binary output (proliferative classes present or not) from the pathologists was compared to that of the CNN classifier.

The CNN model grouped proliferative lesion positive and negative animals at high concordance with the pathologists. This process simulated a workflow for review of these studies, whereby a DL algorithm could provide decision support for the pathologists in a nonclinical study.